Just a matter of routine 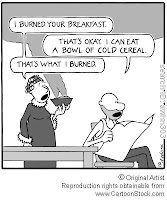 One of the most difficult first tasks facing a new Stay-At-Home-Dad, is just how to split his day up in some kind of constructive manner. When I first became a SAHD after selling my pub 2 years ago, my biggest worry was what the hell I was going to do with my time. Sure I had a 3 year old girl and a one year old boy to deal with, not forgetting the surly/manic/hormonal/loud teenager, but in those first few weeks I just didn’t know what to do with myself.

Obviously the house wasn’t very clean, it was surface clean, something I think all blokes are good at, but it wasn’t really clean. My other half had started making some vague comments about my lack of cleaning skills, and a list of chores soon magically appeared on my desk.

The sheer number of things that needed doing on a regular basis was a very daunting one, the flip side to that was I now had what I considered to be a real purpose. No longer would I consider myself a glorified baby-sitter, I had promoted myself to CEO of the house. I felt quite excited by the prospect, well as excited as you could be about a list of chores, although some of the jobs on it made no sense at all.

Clean inside of oven once a week. What? Clean inside the oven? Surely the super high temperature would kill all the germs, it certainly killed the Sunday Roast on a regular basis.

Air and make beds on a daily basis. This one had me a bit perplexed, I had no idea how or why you would air a bed, so I made an educated guess and left the duvet on the floor all morning, then put it back on the bed in the afternoon. That was easy enough. I failed my first bed inspection, for although I had plumped up the pillows, I had failed to put the two cushions back on top of the pillows, and wedge the big white Teddy Bear between the two sets. These are the same cushions and soft toy that have to be thrown off the bed every night before we can sleep.

The list went on and on and on. To keep on top of this I had to learn some skills that don’t come too naturally to men, well men about the house anyway. The first of which was organisation. I was going to have to organise my life into some sort of routine, that would help me out, and provide the kids some much lacking structure to their lives.

I had recently watched “About a Boy” and if you could ignore Hugh Grant’s haircut, it wasn’t a bad film, with a great soundtrack by Badly Drawn Boy. Anyway I digress, old floppy played a character that organised his life into 30 minute slots, just to while the day away. I figured I could use the system to create some kind of order in the chaos that was our lives.

Getting kids washed, fed and dressed one slot. Taking wife to station and getting paper, one slot. Afternoon nap for the boy, playing on X-box for me, four (of my favourite) slots. I found that by allocating myself three cleaning slots, spread out over the whole day, I would tend to get more done with not quite as long a face. The kids got used to the idea, and soon learnt what would be happening and when, a favourite of theirs was always the ‘watch Dad run around sweeping forgotten toys up’ slot.

The second thing I had to learn was multi-tasking. I had always presumed this meant watching TV whilst reading the paper and scratching your nether regions. The first time I tried to take a phone call whilst changing a nappy was an expensive lesson in how not to multi-task. I could never bring myself to speak into that handset again. The art of juggling children, chores and cooking, the three c’s of the SAHD’s world, is a lesson hard learnt but worth persevering with.

Within months, no more than a season anyway, I was cleaning up as I went along when cooking, the kids were peeling the spuds and naming the ingredients, and I was dishing up food fit for consumption by beings without tails.

I will admit to taking some short-cuts along the way, there were days when the TV became a third parent. At times I would put my wide awake son in his cot with some toys, just so I could vacuum upstairs. I once even told my Mother in Law that I had a hospital appointment, just so I could meet a mate for a quick pint. Sometimes the ends justify the means, in my opinion a happy Dad can only be a good thing for the kids.

So we have all settled into our own cosy little routines. The kids know that if I throw a box of raisins at them it means I have an important phone call to make. They know that if they let me put them in the car without any fuss to pick their Mum up, they will get a yogurt in return when they get home. They know a shiny apple is a reward for putting their toys away. Some may call it bribery, I call it a healthy balanced diet, oh, and multi-tasking.

* This article was originally published on www.dad.ie the site for Dad's that know, want to know, or forgot what they know.
Posted by Unknown at 10:16 AM 12 comments: