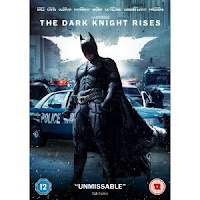 This week a Christmas goodie bag arrived from Warner Brothers for me.  I waited until everyone else had left the house as my lot are like hyenas sniffing around an entertainment carcass whenever boxes like this arrive.  Safely on my own I opened Santa’s sack and out popped 3 DVD’s.  The Dark Knight Rises, New Year’s Eve and Polar Express, something for each one of us.


Obviously I snagged Dark Knight Rises, the final instalment of Christopher Nolan’s Batman Trilogy.  Nolan’s Batman is a dark and moody version and steers clear of the cheesiness of previous incarnations.  The special effects are breathtaking especially the overhead shots of Gotham City as it turns into a warzone.  I won’t give anything else away, but it’s a must see film and had me gripped from start to finish.  Watch out for a star turn by Tom Hardy as Bane, with Michael Caine and Gary Oldman returning to their rolls of Alfred and Commissioner Gordon.
I got a bit sneaky with ‘New Year’s Eve’, I’m not a massive fan of ensemble rom-coms (I obviously need to get more in touch with my feminine side) so I suggested to the Mrs that she spend a nice evening on her own with a glass of wine, some chocolate and a DVD whilst I go out and do some last minute shopping.  She readily agreed and having already finished my Christmas shopping anyway, I popped down the pub for a few hours.
The Mrs thoroughly enjoyed the film which basically I host of stars in intertwining stories all based in New York on New Year’s Eve.  I may even give it a sneaky watch myself, but obviously when nobody else is about, I have to keep up appearances.
Finally there’s Polar Express, a motion capture computer-animated fantasy film that had become a Christmas Classic since its release 8 years ago.  It features Tom Hanks in a variety of rolls and the kids had been hassling me since it arrived to put it on for them.  I didn’t really intend to watch it, I had decided to use the time to tackle their bedrooms, or at least read the paper, but I found myself drawn in to the film and ended up sitting with them and watching it through to the end.  It’s a great feel good movie and one I won’t mind watching more than once, which is a good thing as the kids want to watch it again already.
So there you go, 3 films to cater for everyone in the household and all would make great gifts for Christmas.  Many thanks to Warner Brothers for the freebies and have a Happy Movie Watching Christmas.
Posted by Unknown at 11:38 AM No comments: