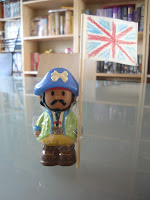 Hello, my name is George the Guilt Explorer and I have a very important job. My vocation in life is to guilt trip people, on behalf on my client, into doing something they really should have been doing anyway and hopefully with a smile on their face. It doesn’t always work of course, popping me into a cookie jar or a case of beer, is always doomed to failure and sometimes violence. But on the whole I have a pretty good strike rate, and I get to explore some strange places.


This week I have been hired by Mr Goonerjamie. He’s quite a nice chap despite being a workshy Househusband, have you ever heard of such a thing? I would never dream of sending Mrs Georgina out to guilt explore whilst I sit indoors leafing through girlie magazines (you think your models are full of plastic, you should see mine). Although to be fair, the wife does guilt trip at an amateur level, but usually when I forget to put the toilet seat back down, or when I bring home drunken Lego friends.

Anyway, I digress. Mr Goonerjamie set me to work straight away, and boy did he give me a huge challenge to start with. His teenage daughters’ room.

On the whole it looked quite tidy, most of the clothes were hanging up and I could tell what colour the carpet was. Then I came face to face with the Wastebin Mountain, and it was tall. Four weeks worth of sweet wrappers, body mist canisters, tumble weeds and discarded homework. I started to climb, narrowly avoiding a cotton wool avalanche and a nail varnish spillage. It took me all day but I eventually made it, and there I stayed until I was noticed two days later. Two long days with nothing to do but read her facebook updates and listen to loud recycled music, it was hell. 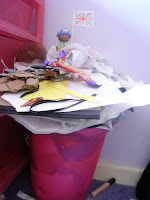 Eventually I was noticed with a quizzical smile, and the waste bin was duly emptied, success. 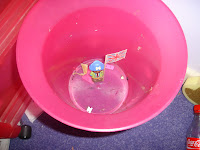 I walked across the landing and over to daughter number two’s room, she’s only five so I wasn’t expecting too tough a task. What I found was a teddy bear skyscraper piled half way up to the ceiling. It was a soft climb, but no less arduous, and I almost fell to my death when a button eye came off in my hands. 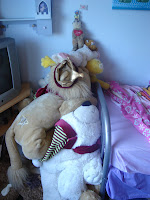 I was noticed quite quickly, and my presence had to be explained, but teddies were tidied and re-settled in the Hanging Gardens of Fur. 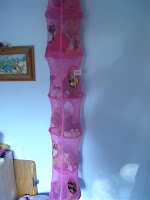 Next stop was the Toy Room where the boy could normally be found. It looked like a crime scene in there, broken toys and half eaten jigsaws. 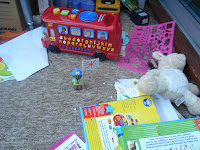 I started to fear the worse, and my suspicions were confirmed when he picked me up and tried to use me as a lollypop. I accepted defeat and got the hell out of Dodge City. There is only so much I can do. 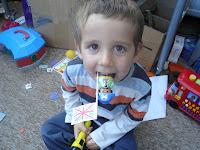 My next task was Mrs G, or the artist formerly known as Imelda Marcos as she is oft referred. There were shoes, boots, flip flops, slippers and effoffbiatch shoes. I could only gather a quarter of them together, I’m not a miracle worker, and I waited for her return from work. 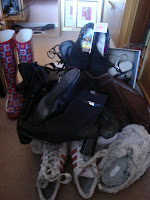 What happened next wasn’t pretty, and nor was her reaction. I was thrown across the room in an explosion of expletives, and there I lay as she started to write what I can only presume was a ransom note. 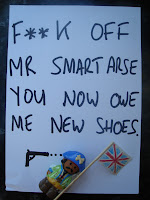 It all got a bit confusing then, with an evil laugh she marched me down the stairs and into the kitchen. There I was placed into a greasy metal room, and with a slam of the door I was pitched into darkness. I let my eyes adjust to the dark and could vaguely make out some strange smelling lumps of blackness. Some smelt of rosemary, garlic and potato, others of beef or chicken fat. If I had been a lazy good-for-nothing Househusband instead of a hard working grafter, I would have realised sooner that I had been placed in an oven that hadn’t been cleaned in six months. As it was, I only realised this when Mr Goonerjamie placed a dirty metal tray above me and things started to get warmer. Could this be it, the end of all things guilt? 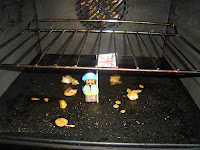 Aromas of olive oil, tomatoes and garlic washed over me, then a smell I couldn’t quite place. A smell that I vaguely connected to the night Mrs Guilt made me take Viagra. That was it, I can smell plastic melting, who on earth puts burning plastic in a pasta sauce? OH NO it’s me. I’m melting. I’m melting. I can’t even see my ‘Made in China’ tattoo any more. Let me out, let me out, tell my wife I love her and to not feel too guilty. 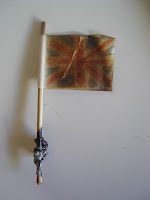 The Invention of Sitting 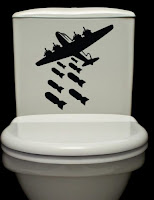 This morning I found myself deep in thought pondering life, the universe and why people leave one sheet of toilet paper on the roll. I was sitting (there may also be a h in that) in my laboratory, or what some people may call the lavatory. It has fast become the place where I do most of my thinking, where the most profound thoughts hit me and where I invent most of my inventions. You may think I’m talking shit (thought I would get that one in before you), but it’s true. This may well be because I do spend an awful amount of time in there, so much time that my Wife has started to insist that I go see the Doctor to get my Irritable Bowel Syndrome looked into. I hope she doesn’t mean literally, what a crappy job that must be.


I can assure you there’s nothing wrong with me, it’s just the only quiet place in the house I can hide. Plus it has a lock so that even if I am found I can still keep them all out. I used to hide in the shed but now winter’s approaching it’s getting a bit cold out there. Is it sad, or plain common sense, that I often pretend to be constipated just to avoid my kids for half an hour? It’s not that I hate them or anything, but it’s a guilt free place to grab a break from them. You’re not avoiding them, you’re just combining a toilet break with some much needed peace and quiet.

Whatever the reasons I’m in there, I still maintain it’s the best place to think. Over the past year I have had numerous ideas, all ripe for invention. All I need now is to find someone with bundles of cash and the same warped sense of reasoning as me. In the hope that one of you is such a person, I share these with you now. Beware, my lawyers are watching. I don’t mean they’re watching me on the toilet, I mean, ahh you know what I mean, stop being so pedantic, just don’t nick my ideas or I’ll send my kids round.

Teflon coated toilets – Seriously, it’s a no-brainer. No more scrubbing brushes, no more nasty stains, no more toilets left full of bleach ready to splash up at you and give your nether regions hi-lights when you forget. I’ve never really understood why toilets are white anyway? Whoever made that decision has neither cleaned one, or had kids. Black would have been a far better choice, if not as obvious as brown. Teflon is as cheap as chips nowadays, and who wouldn’t pay an extra £10 not to have to look at, or clean skids again?

Half width toilet roll - This is my solution for saving the rain forests and the planet. Let’s be honest, you really don’t need all that width, you only use the bit in the middle anyway, the rest is wasted. You also have the added bonus that by buying this product you are telling the world that not only do you care about the planet, but you also have a small bum.

Foot Bidet - A slightly smaller version of your traditional bidet that is sunk into the floor at the foot of the toilet. The deluxe version could also fit one of those foot massagers you bought your Wife for Christmas ’06, but has only been ungratefully used once. This way you can wash your feet whilst sitting on the toilet, not only multi-tasking, but ensuring a cheese free odour for the whole house. It’s what most people use bidets for anyway so why not put them in an easier position?


Package literature - I don’t know if you are like me, but I have to be reading something when I’m sitting on the throne. I do tend to keep a book in there to while away the time, but on occasion I find myself with nothing to read but the ingredients of the toothpaste. There is only so many times you can try to remember the spelling of monofluorophosphate, plus there’s nobody else in there to test you, talk about the worst spelling bee ever. So my idea is to put short episodes of a book on the packaging. Episode 1 could be on the toothpaste, episode 2 on the mouthwash and the title on the floss. Think of the brand loyalty it would create. Who cares that the mouthwash makes you smell like a wino if by using it you get to find out who killed whom with what?
I only need one of these ideas to pay off and I can not only justify the last year I have spent on the toilet, but also the flat screen TV I’m thinking of installing in there. That means I will also have to invent a bum cushion for those long films, I mean bouts of Delhi-belly. See I told you I get all my best ideas when I’m in here. Now if you will excuse me, I have to flush.
Posted by Unknown at 8:54 AM 22 comments: