A match made in heaven


I recently received an invite from Neil McGuigan, chief winemaker at McGuigan Wines, and John Torode, MasterChef host and chef, to launch their new recipe collection.  They had collaborated to produce the perfect food and wine matching service and wondered if I would like to come along to watch John cook and Neil whet my appetite.  I thought long and hard about it but to be honest, they had me at ‘hello’.

So off I trotted to a swankier part of London than I normally frequent, all ready for a taste bud explosion, or at least some free grog and nosh.  Upon arrival a rather large, and rather delicious, glass of Sparkling Pinot Chardonnay was thrust into my hand and the tone was set from there.  When the host himself popped over for a quick chat whilst refilling my glass, I had to admire him for not only his winemaking skills but his ‘fill the glass to the top’ approach to pouring.

As all the Entrees were being passed out there was no end of people making sure you had a choice of wine perfect for the dish.  With the Thai Pork Lettuce Cups a Black Label Shiraz, with the hummus with spiced mince lamb I was offered the Classic Cabernet Sauvignon and for the Arancini I ended up drinking a Black Label Sparkling Shiraz.  This was the first time I’d drunk a sparkling red and I became an instant fan, it mucks with your head at first but believe me, you get used to it very quickly and it will certainly be added to my wine cellar; and by wine cellar I mean fridge.

Dragging himself away from waiter duties, Neil McGuigan gave us a quick speech outlining their objectives for the collaboration and what it was all about.  I knew the traditional rules about when to drink wine; red wine for red meat, white wine for white meat and fish, and bubbles for whenever the kids go to bed, but I was keen to hear Neil’s position on this.

To paraphrase, with more and more people now drinking wine and willing to stray away from the traditional rules, they decided it was fine time to make our lives easier and created food and wine matching service.  On the back of every bottle of McGuigans wine there is a QR code, scan that with your smartphone and you’ll be taken to a website ( www.mcguiganwines.co.uk ) where you can answer some questions about your food and drink preferences.  Once you’ve done that you’ll be emailed a free PDF full of recipes specially designed by John Torode and with each recipe Neil has suggested a perfect match plus 2 other suggestions that would also fit.

We were then treated to a quick masterclass by John who demonstrated one of the recipes, a beef fillet wrapped in mustard dough, which tasted gorgeous with the Reserve Shiraz that had miraculously appeared in my hand.  Things started getting a bit messy from thereon in, I tasted a lovely Classic Semillon Blanc, two rosé wines, one sparkling and one classic.  The Sparkling Shiraz was revisited a few times as was the Sparkling Pinot Chardonnay, I’m a sucker for those bubbles.
Eventually a little voice inside my head started reminding me that I had two parent-teacher meetings in the morning and that maybe it was time to call it a night.  With great reluctance I bade them all farewell and summoning as much grace as I could, carefully walked down the fairly long staircase miraculously without mishap.

I woke up the next morning knowing I had had a good night and mercifully I was hangover free.  There were a few blank spots from the night, one of which was who on earth were the people with me in this picture? 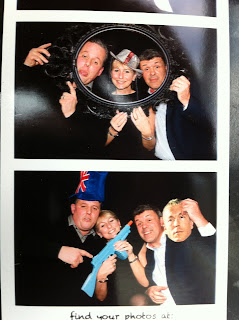 When mum asked me how the night went and I shamed-faced admitted that I got slightly drunk she replied, and I swear this is the truth, “I hope you didn’t embarrass yourself, we drink McGuigan wines all the time.”

Later that day I tried the matching service out myself and found it very user-friendly and easy to navigate.  My PDF was duly emailed to me and I have to be honest, there are a load of really good, but relatively simple recipes in there including Vietnamese Beef Salad, Spanish Fish Stew and Green Curry BBQ Chicken.  There are also some really good wine suggestions to go with them, some of them are what you would expect, but a lot will give you a cheeky surprise.

Many thanks to Neil McGuigan and John Torode for feeding and watering me, thanks to Sabah from Lightbrigade for the invite and a special thanks to all the McGuigan girls for keeping my glass well and truly topped up all night.
Posted by Unknown at 2:10 PM No comments: