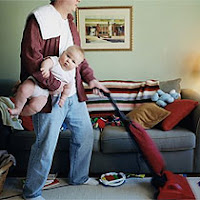 One of the first obstacles the newly appointed Stay at home Dad has to face is a psychological one. Whilst convincing yourself that what you are doing is best for the family, convincing yourself that it is also best for you is a harder sell. Feelings of emasculation and insecurity are quite common and ever present, but with a slight change of mind set, can be easy to overcome.


I have found that the quickest and easiest path to the golden chalice that is ‘Acceptance’ is to bend over and take it like a man. Pretty much from the off, whenever I was asked what I was doing now that I had sold the pub, my defiant reply would be “I’m a Housewife”, with a silent “What of it?” thrown in at the end for good measure.

It didn’t matter if they were close friends, vague friends or complete strangers I had once served, I always gave the same reply. This was invariably followed by one of the following three reactions/replies:

2. A nervous laugh, followed by a swift subject change (I sometimes have to check to see if I am still wearing my pinny.)

3. A blank look that demanded a more detailed explanation.

Rather than be embarrassed, I would just turn the subject on its head and embarrass my interviewer. Many a person has ventured the opinion “So you just sit around doing nothing all day.” The obvious retort to which is “So your Mum was a lazy cow then when she spent her life wiping your arse and cooking for you?” A bit confrontational I know, and possibly the reason my wife calls me the ‘Bolshie from Barking’, but sometimes gross stupidity deserves nothing less.

If I am in less polite circles, down my local for arguments sake, I will quite often sign off with the salutation “See you all later, time for me to go back to being a Housebitch.” Guaranteed to get a laugh, and let’s be honest, not far from the truth. I would also enjoy telling everyone how easy it was, how much free time I had, all lies of course but jealousy is a great distracter. Well I did until I received a phone call from the head of the local Housewives union (my best mates wife actually). She quite grumpily informed me that I was getting them all in trouble. It turned out my (soon to be ex) mate had come home from our liquid refreshment session, all full of insider knowledge about how easy her life was, and what the hell was she doing all day, oops.

So I have now gone from struggling to accept, to almost playing the stereotypical Housewife role. I tut and moan when the breadwinner (It still hurts to type that, it’s part of my acceptance path) comes home and turns my calm kids into screaming monsters. I am either campaigning for more housekeeping money, or defending myself over the shopping bill, they really have no idea how much things cost in the real world. Don’t even get me started on how annoying it is to find her work clothes scattered in a path on the way to the hot bath she needs, apparently to relax her from the ‘stressful’ day she’s had at work. Stressful my arse. Try juggling teenage tantrums, potty training, and cooking the housekeeping books to hide that sneaky case of beer that’s sitting in the shed.

I am also very proprietary about the kitchen now. I recently decided it made more sense for the cutlery to be in the drawer nearest the place I plate up the food (delusions of chef grandeur I know). The wife has not stopped moaning about this change, even though the only time she goes to it is to grab a teaspoon to stir her tea, and kill my coffee with. I have been forced to point out that this is my place of work, and I would never dream of telling her what cabinet to use when filing her legal papers in her office at Charge by the Minute & Sons.

I often reminisce about my previous life as a publican, normally when I am cleaning up after the latest potty failure, and there is a part of me that feels quite maudlin and wistful. Then I realise I can draw quite a few similarities between my old and new job. Both sets of customers speak a language vaguely related to English. In fact my many years listening to Drunkanese helped me decipher the mysteries of baby babble, if you listen hard enough you get there in the end. Both sets of customers are no fun to clear up after, although the kids are slightly tidier and more likely to control their bodily functions. Both jobs demand I be surrounded by alcohol at all times, of course instead of selling it, I am now consuming it, impossible to do this job without it in my opinion. So taken logically it becomes very easy to realise what a full and proper job we have.

My middle child has now started school, leaving just me and the little fella at home all day. Life is moving too fast and they are growing up so quick. I am now hoping that he turns into a three year old Peter Pan, permanently frozen at this age, thus sparing me the hassle and upheaval of going back to work. Now that is one thing I will struggle to accept.

* This article was originally published on www.dad.ie the site for Dad's that know, want to know, or forgot what they know.
Posted by Unknown at 9:42 AM 9 comments: