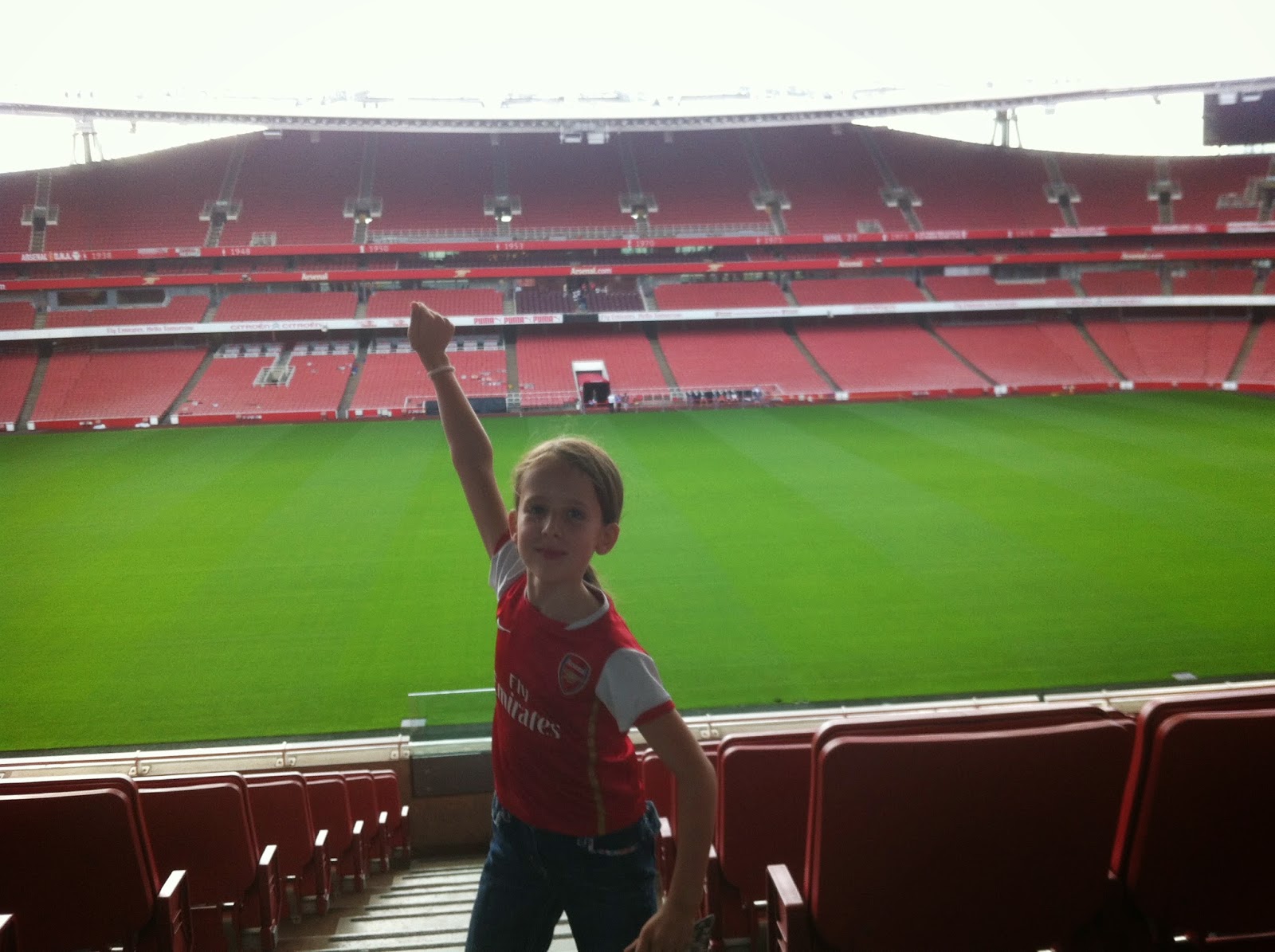 Last week I was invited by Vodafone to attend the launch of their #First campaign. In layman’s terms they want to throw a shed load of money at someone to create their ‘first’ something, something life-changing, something that keeps the world interesting. In celebration of this we were to watch a short film about how they flew a young football team from Ghana, a team that hadn’t even played on grass before,  to the UK to compete in their first international football tournament.

When they told me that the screening was going to take place at the Emirates Stadium, home of my beloved Arsenal, I figured I would have to bring my daughter Kaede along for her first visit to the stadium. It was probably a bad move to tell her about the trip a full two weeks before it actually happened, as by the time the day actually arrived she was beside herself with excitement.

The look on her face when she first walked into the stadium and took it all in was beyond joy. She had entered her new church and it was obvious that this would be a place she would worship for the rest of her life. I felt a pang of guilt for inflicting this football madness on her, but reconciled myself with the fact that if I hadn’t done it then her Mum, a Tottenham fan, would of and that would be a fate worse than…well worse than anything I could imagine.

The film itself was very poignant and very funny (especially the tour of London film) and I would recommend everyone to go and give the film a watch here and the London tour here.

I would also very much recommend that you get yourselves over to the website www.firsts.com and make your pitch for your very own #First. And despite the fact that I never win competitions, I’m going to enter myself. After all, there’s a first time for everything. 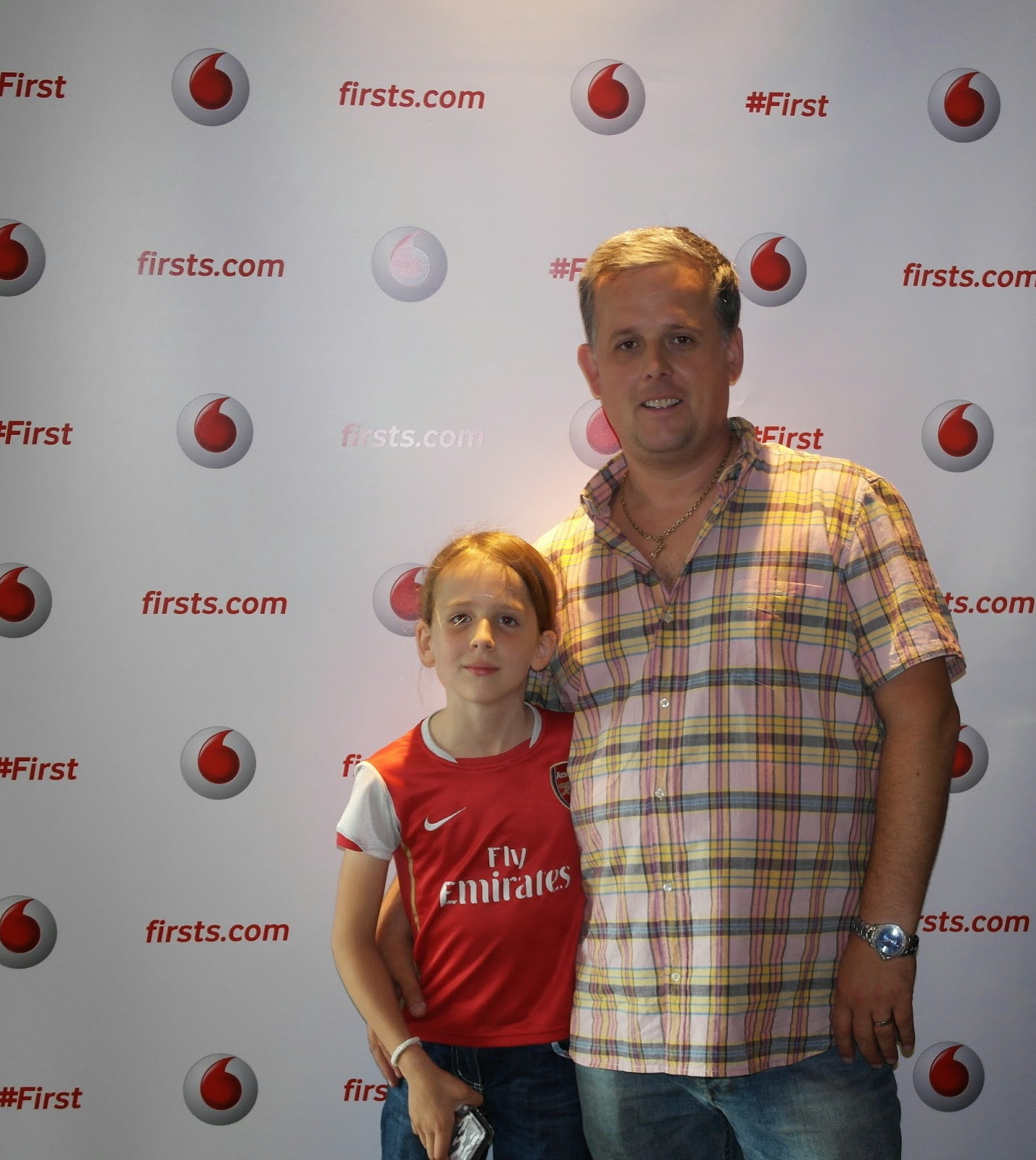 Posted by Unknown at 4:29 PM No comments:

There’s been a first birthday, a first Christmas, a first Fathers Day and a first ‘how the hell do you prepare that surface?’ moment.

It’s not until someone has gone do you realise how big a shadow they cast and by Christ he was a big man.  We said at the time that your boots were too big to fill, that me and Daniel would have to have one boot each, but I don’t think I’m even managing that.

You’ve missed so much this year, or maybe you haven’t. Maybe they do let you look down on us via some sort of celestial Skype and you’ve seen all the nonsense we’ve been up to. I would like to think so, but either way I’ve certainly missed telling you about it.

And it’s not just all the family stuff I’ve missed sharing with you. I’ve missed playing you the new Gregory Porter CD, you would have loved him, a voice so deep it screams big bands and smoky nightclubs. We also got to see Frank Sinatra Jnr at Ronnie Scott’s and I swear to God when he walked on it was like his Dads ghost had walked on with him. I wanted to tell you about that so much that it physically hurt, it still does.

They say a black hole sucks in all matter, well it feels like your death has done the same and left a whole bunch of ‘it doesn’t matter’. Nothing seems as important, as significant, as worthwhile anymore. All milestones are being judged and measured in relation to you and your bearing on them.

What’s worrying me more is that now this year has passed so will my memory of you. I’m not sure I want it to hurt less. If I can still cling on to my pain then you will continue to feel real, to be with me. Whilst it hurts this much I can still see you every time I blink the tears away.

The passing of time hasn’t been all bad though. It’s taken a year for my first thoughts of you not to be lying in that hospital bed, slowly saying goodbye to us all without even knowing it. Some days my first thought is of you in the pub, or in the garden feeding the fish. More often than not I remember you through a child’s eyes. Could you really have been that big, that safe, that there?

I don’t know, the mind plays some cruel tricks on you sometimes but at least it’s now stopping me from ringing you up for advice. Three times this year I’ve rung you to ask you something, something innocuous, only for Mum to answer leaving me to scramble some sort of excuse for ringing.

It seems crazy that today will hurt more than any other. After all, in the great scheme of things, it’s just another day without you, just like the other 364 have been. But it does hurt more, as today is the day where all I can remember is saying goodbye. Kissing your forehead one last time, telling you I loved you one last time, squeezing your hand and telling you it’s OK to leave now, to stop hurting and leave it all behind.

I’ve spent a year being angry that your ‘ghost’ hasn’t come to talk to me whenever I take a shower, just like your Dad’s did for you. I couldn’t understand where you were, did I not love you enough to deserve a visit, but that can’t be right? My heart is so full of you it feels fit to burst and I don’t know how to manage that feeling, how to keep those emotions in check.

More often than not I just sit on the back step gazing into the garden, watching the bees, the occasional dragonfly and listening to the birds. That’s when I think I’m at my closest to you. I can almost feel you putting your arm around your tiny sons shoulder and telling him it will be alright, everything is good. So maybe that’s better then. This way I can still see you with every yellow rose bud that’s starting to bloom, every bird looking for food and every blade of grass that will never look as green as yours did.

So today I’m going to go down the pub and have a pint, well two actually – a Light and Lager me and a Guinness for you, and then maybe I can start to say goodbye properly. Start to think of you without blubbing, start to remember only the good times and not those shitty hospital times. Maybe I needed this past year of hurt to toughen me up to continue without your ever-guiding presence. I hope I don’t let you down. Like any kid, I’ve only ever wanted you to be proud of me.