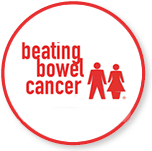 April is Bowel Cancer Awareness Month and Beating Bowel Cancer are asking us all to get involved in a bowel movement.  I know what you’re thinking, easy right, I mean jeez, I can even fake a bowel movement when the kids are bugging me enough and I want to hide from them for a while.  Unfortunately that’s not the kind of movement they’re talking about, they want us to get involved in the fight to beat Bowel Cancer.  One in four lives are touched by bowel cancer somehow and unfortunately my family’s lives have been hit more than that.

Seven years ago, after a long and courageous fight, my brother in law Stephen died from Bowel Cancer.  He was 46 at the time of his death and left behind a Wife and three young children.  Not satisfied with that, it then decided to have a pop at my other Brother in law, John.  Luckily cancer lost that battle, in no short measure to the Doctors and the endless Tottenham songs that John insists on singing at the drop of the hat (even cancer can only put up with so much drivel about ‘If you know your history’).


So with all that in mind the Mrs has decided to run the Marathon again in aid of Beating Bowel Cancer.  A tough task you may think, after all it’s been 10 years since she run her last marathon, she’d had two kids and an uncountable amount of vino since then, but do you know what’s tougher?

Being married to a marathon runner.

I don’t know how Paula Radcliffe’s old man puts up with it to be honest, I have to suffer it every decade and that’s bad enough, but every year?  Sod that for a game of soldiers.  Don’t understand, well let me explain.  The Marathon will take over their life and when something takes over their life, it takes over yours, make no mistake about that.

First of all it’s the applying for the ballot to get into the marathon in the first place, the constant ‘Has the post arrived yet?’ phone calls whilst she awaits the verdict of the long-legged lottery.  And then the day when the big package arrives, the big package that means a consolation prize of a Virgin running top and a letter saying you haven’t got in and you knowing you then have to break that news to her whilst she’s at work.  Then the postman wait again, hoping that Beating Bowel Cancer are going to give you one of their ‘Golden Tickets’ so you can run for them.  Then a brief burst of happiness when they say yes, that’s it, they’re in.  Then it starts…the training.

Oh, did I miss a step?  Of course, that’s right, I forgot the buying of the equipment and by equipment I mean the running shoes and not just any running shoes, these have to be the Marks and Spencers of running shoes (just not bought at M&S because that would be just plain silly).  But apparently buying running shoes isn’t as simple as one would think.  We bought a brand new car in January and when you throw in all the options, the finance, the extras, the incompetent staff, the colour choices and all the razzmatazz that goes into buying a new school-run machine, we were still in the showroom less time than we were in the running shoe shop.  I kid you not.

Oh my god the injuries.

Anyone that knows Trish will acknowledge that the things we fondly call ‘Trissues’ seem to happen to her a lot.  Who do you know that gets cramp in the jaw with every other yawn?  Who moisturises before they put their contact lenses in, then spends the rest of the day half blind?  Who walks into a closed door after triumphantly throwing a drunk out of the pub?  Who else could rip off a toenail bending over to pick up some rubbish (I know, I was shocked by that one as well, she never picks up rubbish)?

Well the training for this marathon has constantly topped that lot.  It breaks my heart but it’s been one inauspicious injury after another throughout this whole regime (I call it a regime as ‘Training Trish’ reminds me a bit of Idi Amin).  Her ankle has gone, her knee, her ankle again, flu, knee again, stomach bug and finally the old favourite…the ankle.

And as painful it’s been for her, it’s even more painful to listen to.  Trish will be the first to admit that she’s not the best patient and I’d also admit that I’m not the best nurse.  I genuinely would take her pain away if I could, not out of any sense of chivalry you understand, it’s just easier that way as Trish is an excellent nurse and I’m a fairly good patient.  Just give me the remote, leave me alone and you won’t hear a moan out of me.  Trish, however, can talk about an injury until her mouth heals over.

And then there’s the constant marathon talk, the tides going in and out are inconsistent in comparison with the talk that is all things marathon.  Seriously, give me a snickers every now and again as there is not a subject she cannot turn into a marathon.  A train ride gets her nervous because as she points out (every time), she can see Tower Hill on the map and she’ll be running past it on marathon day.  At the weekend we were strolling through Kew Gardens admiring the world’s tallest glasshouse plane, a Chilean wine palm, when out of the blue she announced that if this was marathon day she would still be running.  If we see a runner then she says it should be her, if she’s just been running and we then see a runner then it should be her tomorrow.  The marathon is never far away and it’s getting closer.

It’s less than three weeks away now, the training is tapering off and I’m trying to keep her away from anything that may injure her - like rubbish, or cobwebs, or a discarded tea-towel, or who knows what?  Our house is a veritable minefield of potential Trissues.

All kidding aside, it is close now and I’m getting nervous for her.  She has put so much pressure on her shoulders (and calves) just so she can say to Cancer ‘Fuck you.  You took my brother, tried to take another one and I’m not standing for it’.  You will not believe how tough it is to juggle training, injuries, a job, two young kids who guilt trip her every time she has to go training instead of reading a bedtime story and a wise-arse Husband that takes pictures of you when you’re stuck in an ice cold bath.

So that’s what she’s doing, all you have to do is sponsor her.  It doesn’t have to be much, everything helps but every pound note she gets will hopefully get us one step closer to maybe saving somebody you know.  Maybe they will pick up one of the 400,000 symptom awareness leaflets that Beating Bowel Cancer distributes.  Maybe they won’t become one of the 40,000 people that are diagnosed with bowel cancer each year, I truly hope so.

You can donate at http://www.justgiving.com/patriciarunning2013/
Read her blog at http://rundownandrunning.blogspot.co.uk/
or contact Beating Bowel Cancer at http://www.beatingbowelcancer.org/
Posted by Unknown at 1:02 PM 1 comment: