This is a sponsored post brought to you, in part, by those lovely folk over at ASUS.  A while back they gave me one of their new Eee Pad Transformers to use in my everyday life (as opposed to my everyotherday life) and let you know the results.  It’s a lovely bit of kit and I’ve loved using it, but there is one person in the house that has loved it even more than me, my six year old daughter Kaede.
She’s stolen it to make YouTube videos, she’s posed for it on an empty Tower Bridge, in fact I’m fairly sure she now thinks it is actually her own property.  She has her favourite games on it and is quite often found squirreled away somewhere playing Bubble Blast.  There are so many free apps to download on the Android Market that I’m always going to be guaranteed a way to keep her quiet, a godsend.
This week she decided that the Eee Pad could solve one of her biggest problems – her brother.  Apparently he keeps going in to her room and making it untidy, believable enough, well believable enough until you consider that the photo underneath is an example of what she considers tidy. 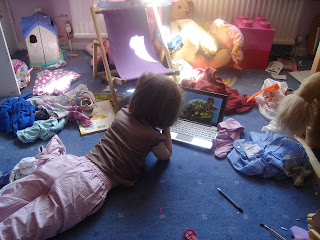 Anyway, she has decided that she needs a warning sign that will let him know he is no longer welcome in her room.  The Polaris Office software that comes pre-loaded on the Eee Pad comes with a Presentation option, so I decided to let her get on with it.  I gave her a quick run through on what buttons did what until she rather impatiently told me that she had ‘got it’.
She seemed to get on with it quite well, I think the instinctiveness of using a touch screen came to her a lot quicker than using the click and drag of the PC.  Several draft versions were discarded before she eventually plumped for the final version below. 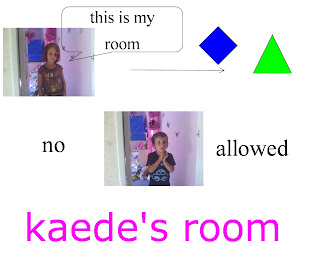 I’m not sure it’s going to do the trick, I’m even less sure if I will notice the difference even if it does, but she enjoyed making it and proved, yet again, how easy the Eee Pad is to use.  Now all I have to do is steal it back from her.


ASUS have also just launched a competition to give away an Eee Pad Transformer. All you have to do is visit this link http://techinstyle.tv/category/products/pads-and-slates/ , comment on any one of the Eee Pad blogs there and Bob’s your Uncle, you get entered into a prize draw. Good luck.
Posted by Unknown at 11:46 AM No comments:

This is a public service announcement - brought to you, in part, by the folk from Samsung, Red and Dinosaurs Unleashed.
Last Saturday me and my brood were invited down to the O2 in London, aka the Millennium Dome, aka that initial waste of public money, aka wow what a great venue now, aka that place I saw Prince at an after-show party and didn’t get home until 5am.  Samsung wanted us to try out their new ‘Full HD HMX-Q10 Camcorder’, and they had picked the Dinosaurs Unleashed exhibition for us to test it in.
I didn’t dare tell the kids about the trip until the morning of the said trip, a week of dino-begging would have been far too much to take.  I truly think the ‘BC’ in 10000 BC stands for ‘badgering children’.  Once told, the excitement levels rose to numbers not seen since the last Easter Egg hunt, but we managed to get them calmed and cleaned (no mean feat as it looked like they had been doing some excavation of their own) in time to jump on the tube to Greenwich.
When we got to the O2 all I could see was a sea of pink and there was a distinct smell of sweat and oestrogen in the air.  Thousands of women had just finished their Run for Life and the only thing standing between them and their exit home was me and my lot.  I grabbed the kids and we huddled behind a bin, nervously waiting for the stampede to pass.  I tried to tell the kids that this wasn’t part of the dinosaur thing, but they didn’t look convinced.
We eventually made our way to the exhibition and met up with fellow bloggers Jen, Sally and Alex.  As we waited for our hosts we all tried to keep our restless kids under control (unsuccessfully of my part) all whilst holding those nervous fixed grins that say ‘please tell me there is something wrong with your eyesight and you didn’t just see my kids go through that bin’.
The lovely ladies from Samsung and Red arrived (I’m sorry, I am really, really crap with names) and set about showing us how to work the new camcorder.  I have to say I was impressed – small and lightweight, it even fitted in the front pocket of my jeans (although that did make it look like I was really ‘excited’ about the product).  It was also very, very easy to use.
The whole tutorial took less than 10 minutes and only took that long because of kid interruptions.  It had a touch screen for all the technical menu type stuff, but the basic use could be done using your thumb only, perfect.  It also had something that Samsung call ‘Switch Grip’.  This meant that if you are a south paw, you can flip the camcorder upside-down too and the screen would flip with it.  Quite nice of them to think of all those strange left handed people, I have sinistrophobia so I wouldn’t have bothered personally.
http://www.youtube.com/watch?v=pth4QXOHLCA
We headed off for a quick lunch and a quick beer for fortification purposes, and then back to the exhibition.  To be honest, I think it would be unfair for me to tell/show you too much about the dinosaurs, I don’t want to spoil it for anyone thinking of going.  I will say the kids absolutely loved it, and even better, it quietened them down.  A word of warning if you go on a hot day - make sure you take plenty of water, it can get really hot in there.  It was quite dark in there and I was a bit worried about how much the camcorder would actually pick up, but it did really well and it also captured the sound really well.
http://www.youtube.com/watch?v=PXM_f3rWoCU
Eventually we were all dino’d out, so we said our goodbyes and headed off home.  Except we had to get the train home as the wife had mis-parked the car (only joking dear.)
http://www.youtube.com/watch?v=cXfappPWQVI
All in all we had a great day and the Samsung Full HD HMX-Q10 Camcorder is a lovely bit of kit.  I have attempted to make a quick vid to show you some of the functions (please don’t sue me Samsung for bad presentation),
http://www.youtube.com/watch?v=-m-k7lvqnlw
but for the more technically minded, here are some of the specs:
I don’t know what the majority of that stuff means, but it all adds up to a nifty little camcorder that is easy to use and quick to turn on when your kids try to set up a dinosaur fight between their toy dinosaurs and our Dragon lizards.
http://www.youtube.com/watch?v=kIqfsir909k
Posted by Unknown at 4:08 PM 2 comments:

I have an important announcement to make, THIS IS A SPONSORED POST.  You may by now know that those lovely folk over at ASUS have given me one of their new Eee Pad Tablets to play with and to see how I use it in my day to day life.  Well this week I nearly failed in that most simple of tasks.  You see, I lost the darn thing.
I know, I know, I'm an irresponsible fool, I've only had it for 3 weeks, I should take better care of things and this time I really thought I had.  I realise that it's quite small, after all that is the point of a tablet, but it's not small enough that it could fall between the cracks in the floorboards.


I searched high and low, I searched all the obvious places like the tables and my work desk, and all the unobvious ones like the garage and the toilet.  I found things that were lost but not important (the duct tape I needed last week to fix a draw), things that were important but not lost (a diamond earring that my wife supposedly knew the location of but as that location was in my toolbox, I somehow doubt it), and things I didn't even know existed (sorry, I've been sworn to secrecy on that one.)


I started to curse the ASUS developers for the not having the foresight to add some kind of app that would aid my search. Something where you could whistle and the lost tablet would bark back at you would have been perfect.  I think I may suggest that to them for the next update or something.
So three hours of fruitless searching and cursing still left me light one Eee Pad and in one hell of a predicament.  I decided to go and lie down in my bedroom and try to compose an explanatory email to ASUS.  Maybe it was my sense of panic that made me overlook it, but I suddenly noticed how quiet the house was, a silence I should be thankful for, but one that made me (like all parents in that situation I guess) suspicious.


I poked my head around Kaede's bedroom door, and I saw her in full-on performance mode.  Her innocent antics put a smile on my face and made me forget about the missing tablet, well it did for the two seconds it took me to notice that it was the tablet she was performing to.
After a quick check to make sure the tablet was in one piece, it was, and a few reprimanding words that would undoubtedly fall on deaf ears, I asked her what she was up to.  She informed me that she wanted to make a movie to put on YouTube so people could see her performing.  I pointed out that she was only six and that if she wanted me to film her then I would.  In a rather haughty manner she informed me that she didn't need any help in the making of it, but I would have to post it to them.
I checked the tablet and found she had made not one, but five film clips.  I'm not sure I could describe the clips with any great justice, let’s just say they have a feral quality.  I have attached one of the slightly less bizarre clips for your perusal and maybe as an excuse as to why I like a beer or four.


http://www.youtube.com/watch?v=KfyOmLW2f-c
I know Kaede has enjoyed playing some of the games I've added to the tablet, but I was quite surprised at how easy it was for her to start using the camera and making videos with it.  It does go a great way to explain why I've found the Eee Pad so easy to use though.


For the technical minded amongst you all, the front camera is 1.2 M Pixels and the rear one is 5 M pixels.  The tablet also has a mini HDMI port so you can plug it straight in to your HD TV and watch your creations in all their glory, if you so desire of course.


ASUS have also just launched a competition to give away an Eee Pad Transformer.  All you have to do is visit this link http://techinstyle.tv/category/products/pads-and-slates/  , comment on any one of the Eee Pad blogs there and Bob’s your Uncle, you get entered into a prize draw.  Good luck.
Posted by Unknown at 8:45 AM 3 comments: