Away with the Fairy's

OK, before we start, I have a confession…  I’m a habitual Fairy sniffer.  I’m one of those people you have to lean over to get your washing up liquid because I’m stood there opening the lids and sniffing, desperately trying to decide what new ‘flavour’ to get before the Security Guards throw me out for disturbing behaviour.
When I’m caught up in this endeavour the wife rolls her eyes, Storm hides her face in shame (yet again) and Kaede and Nate try to join in (well they did until the day that Nate got a nose full of apple and lime blossom Fairy and was sneezing green bubbles for a week.)  My argument is that I’m the one that always does the washing up, so what’s wrong with it smelling nice at the same time?
So when Fairy contacted me and asked if I would like to join them at a pop-up restaurant at the OXO Tower for lunch cooked by the two starred Michelin chef Michael Caines to launch their Platinum range, there was only going to be one possible answer, ohmygodyescountmeinthankingyouverykindly.  There was a catch however.
I had to wash up afterwards.
Bring it on, said I.
So last Saturday found myself, the good Wife, Storm and Kaede heading off to London, all dressed up to the nines.  I think Kaede was the most excited, she’s wanted to be a chef since she was four and she was a bundle of nervous energy at the thought of meeting a ‘real proper chef’. 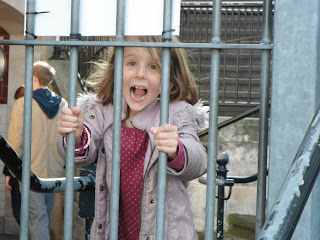 When we arrived, everything looked as swanky as you would expect and one look at the menu (based on Michaels childhood memories) and we knew we were in for a treat.
Shepherd’s pie with saddle crusted lamb with smoked aubergine puree and a rosemary and thyme jus. 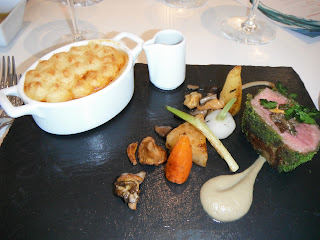 OH MY GOD.  Sorry, I didn’t mean to shout but it was so delicious.  I am not a big lamb fan, but this tasted like no other lamb I had tried before and the Shepherd’s Pie went way beyond gorgeous. 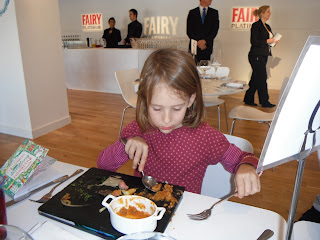 After the mains it was time to pay the piper and wash up.  Fairy had set up a stand where two people could race to clean a pile of dishes, head to head, with the best times winning prizes.  I faced off against Storm and after some strict instructions from the Scottish Washing up Sergeant, we were off.  Storm, showing off all the skills of a layabout student, made a meal of it but still managed to come in with a respectable 26 seconds.  I, however, in a performance par excellence managed the unbeatable time of 16 seconds.  Unbeatable that was until Sandy Calico managed to beat me by a second, grrrrrrrrrrrrrrr. 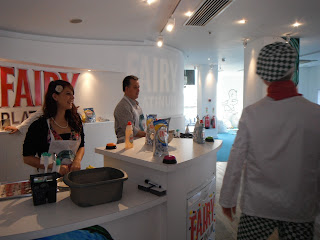 Taking my defeat like a man, I wandered back to the table to hunt out a glass of red wine.  When I got there I saw that dessert had arrived.
Sticky Toffee Pudding with Butterscotch sauce and caramel ice cream.  To say Kaede was impressed was an understatement. 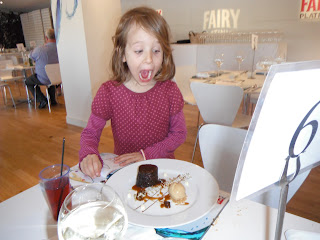 After we had finished our desserts I settled back with a nice glass of red and released a very contented sigh.  I then realised that the table was a little bit too quiet and noticed that Kaede had disappeared.  I looked around the restaurant and quickly realised why she had disappeared so fast.  Michael Caines, having finished in the kitchen, had popped out to say hello and there was Kaede, bending his ear and grabbing his autograph.  He certainly was happy to give her his time and pose for a pic and has cemented her desire to be a chef. 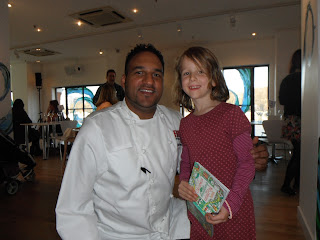 He then started announcing the winners in the washing up challenge.  The Wife’s 26 seconds in the dishwasher challenge won her nothing, but my 16 seconds won me 6 months worth of Fairy Platinum, whoop whoop.
Since returning from the event I’ve been using Fairy Platinum and must admit that it really works well, even after a Sunday Roast.  But most importantly it smells pretty darned good.
Many thanks to Fairy, Michael Caines and Rosie Mann at Ketchum PLEON for the invite and an excellent day which will certainly stay in Kaede’s memory for a very long time.
Posted by Unknown at 11:53 AM 3 comments: 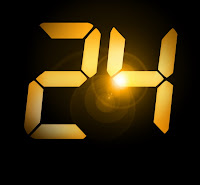