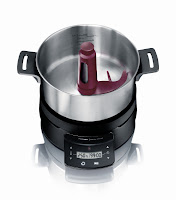 A couple of months back I was invited to Jamie Oliver’s ‘Fifteen’ restaurant for the launch of the HomeCooker, a new kitchen appliance co-created by Jamie and Philips.  The HomeCooker is a multi-functional device designed to make your life easier when cooking homemade meals. It can stir, steam, sauté, melt, simmer, stew, boil, and even fry whilst cooking unattended - giving you some quality time back.  That was the blurb anyway, so I was intrigued to see it in action.


The HomeCooker comes with a book of 25 recipes created by Jamie Oliver and the two they demonstrated were Classic pan-cooked breakfast and the homemade toasted granola.  Watching them cook bacon, sausage, mushrooms, tomatoes and a fried egg all together in the one machine was unreal and tasted gorgeous.  I’m not the world’s biggest granola fan but I do appreciate that it must be a pain to homemake, especially when you’re trying to toast the nuts, seeds and oats in honey, but the HomeCooker made short work of it.  They were also demonstrating the cutting tower that is part of the range, it has 5 cutting tools that can slice, shred or julienne straight into the cooker and it was making short work of everything they were putting in it.  I came away impressed with what I had seen and began scheming a way of making the Mrs buy me one.
A month or so later I got a call asking if I would like to try out the HomeCooker myself and I gladly accepted, especially as I hadn’t yet convinced the Mrs to treat me.  I had already figured out how it would fit into my life to make things easier and now I got to put that to the test.  I love to cook stews, goulashes and the like, most often standing out in the kitchen alternating my time between stirring the pot and slurping the wine and hopefully this would free up some time for something else.  I didn’t have the chopping tower to test, but to be honest  I’m quite proud of my knife skills and I’ve got it down to only once a month where I cut myself deeply enough to require a superglue repair, so I wasn’t that worried.
The first recipe I picked from the book was the slow cooked Hungarian beef goulash, with a cooking time of 230 minutes.  The instructions were easy to follow and with the timer and temperature control sorted with a quick touch of a button we were on our way.  I found it hard to resist the temptation to stir, distrustfully watching the stirring arm slowly whir around.  I genuinely spent so much time watching the process, keeping an eye on various ingredients to check if it was all being stirred randomly, that the Mrs started to mock me “You get given a machine that does all the work for you and you just stand there staring at it. Div”.  I tartly responded that the recipe called for sour cream and we only had normal so could she just stare at that for a while?  I soon had the kitchen to myself again.

The machine was cooking the food at a much higher temperature than I would normally have used myself, with everything at a constant high bubble, but due to the constant stirring nothing was burning or getting stuck to the bottom of the pan.  This resulted in a lot of the ingredients melting away into the goulash and creating a beautiful thick sauce.  I can only again apologise for my photos (I think I need Philips to invent me a cooking camera), that do not do the food justice.  The goulash was gorgeous, wolfed down by all and has become a firm favourite. 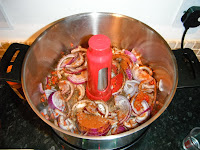 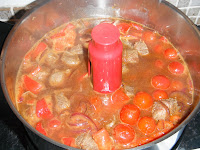 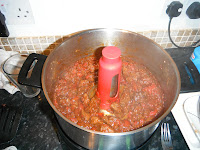 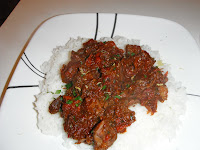 I decided to try it out with a few of my own recipes and vowed to not stand and stare at it, instead spending the time saved doing something more constructive like playing the Xbox, watching the TV or when things got desperate, playing with the kids.  The timer gives off a fairly loud beep once it’s counted down and auto shuts-off so nothing gets burnt.  First up was Spicy Meat Gumbo, a recipe that normally requires you to stand over the pot as you turn onions, celery and peppers into the roux that forms the base of the dish.  The HomeCooker handled itself well, I kept myself away from the kitchen and the resulting dish was beautiful (if not badly pictured and presented).

Next up was Ox cheek stew, I love cooking with this meat, especially when cooked for 3 hours or so, making it the perfect recipe for the device.  Again the HomeCooker didn’t let me down, the onions melted away and created a really rich and thick sauce.  I was in cooking heaven. 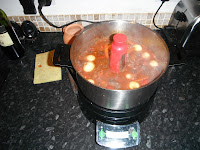 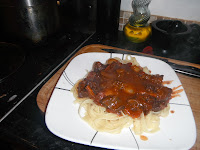 My next choice was something that cooks quickly but demands a lot of stirring, Chorizo and tomato pasta.  A fairly simple meal that just requires you to fry up the chorizo and onion, then add the dry pasta and tomatoes.  Unfortunately this is a meal that always leaves a sticky mess at the bottom of my pot as it requires almost constant stirring at a fairly high heat and well, I’m easily distracted.  The HomeCooker handled this with ease and due the simple temperature controls I could easily switch from 250 to fry the chorizo to 175 to get things boiling, to 130 to finish things off.  Job done, sorted. 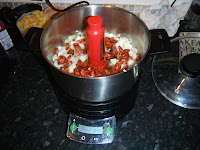 Since the initial experimenting phase I’ve now integrated the HomeCooker into my normal cooking routine and it gets used at least twice a week, sometimes more.  It also comes with a pasta insert and steaming trays and I’m looking forward to using them to make my life even easier.  I have to be fair, I do enjoy cooking and I don’t really consider myself to be a lazy cook and my initial worry was that this device would turn me into one.  My fears were unfounded as on those days where traditionally I would find myself without enough time to prepare a proper dinner resulting in me just reaching into the freezer for a ready meal, were replaced with me throwing the ingredients for bolognaise or chilli into the HomeCooker and letting it do it’s stuff and that can only be a good thing.
For the technically minded amongst you, the 3 litre stainless steel bowl is dishwasher friendly and more than large enough for family size cooking, the temperature range is from 40-250 degrees and the 99 minute timer can run up or down.  More information about the product, including recipes can be found at www.philips.co.uk/homecooker.  The Philips HomeCooker is the first product in the Philips Jamie Oliver kitchen range and is exclusively available at John Lewis.  Thanks to Philips and Samantha from Ketchum Pleon for the event invitation and the use of the HomeCooker.  And as usual I am going to have to move home before they send the courier round to pick it back up again, I’ll leave it with a neighbour, honest.
Posted by Unknown at 1:07 PM 2 comments: