Maybe it's because I'm a Londoner

I have an admission - I’ve been ignoring my relationship of late.  I pay no attention to her, I take her for granted.  I know she will always be there, so I ignore everything she has to offer.  Do you know what, sometimes I’ve been known to litter her, unforgivable I know.  For all this I want to make a public apology.
I’m sorry London, I had forgotten how beautiful you are.  I had forgotten how many interesting nooks and crannies you had.  I had forgotten how much of you remained un-explored to me and for that I humbly apologise.  You may wonder what brought on this ‘road to Damascus’ moment, what seismic event could have occurred?  Well, it turns out that seeing London from 135 meters was enough to do it.
I received an email the other week asking if I would like to go on a Champagne Experience on the London Eye, followed by a London Eye River Cruise down the Thames.  The first words that jumped out at me were FREE, CHAMPAGNE and A BREAK FROM THE CHILDREN, so I obviously accepted (as you knew I would) and on Saturday the Mrs and I took the (sometimes) short journey from East to Central London.
We had picked a beautiful day for it, the sun was shining and the air had that crispness to it that makes September the best month of the year (the fact the kids go back to school in September is pure coincidence).  It doesn’t take long to get from my neck of the woods to Westminster, so before we knew it we were standing at the foot of the wheel and craning our necks upwards at the tallest Ferris wheel in the Western hemisphere.
We went inside to pick up our complimentary tickets and as we were early we popped into the new 4D experience that comes as part of package.  I won’t spoil the surprise too much, but it’s a short 3D film with added wind, bubbles and mist effects, which was freaky if not enjoyable.
Ten minutes before our allotted time we went to the meeting area and were promptly walked over to the Priority queue, all the while trying not to look too smugly at the queuing tourists.  Each capsule holds 25 people, but with the Champagne Experience our group of 20 was split into two pods of 10.  This gave us all plenty of room to wander around and enjoy the view, and OH MY GOD what a view. 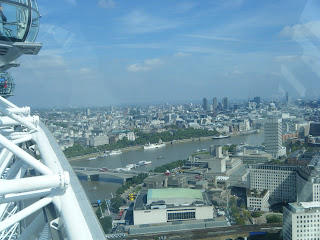 It takes fifteen minutes to get to the very top, but I guarantee your first WOW will be uttered within five.  The view down the river to Tower Bridge is spectacular enough, the view of St James Park and Buckingham Palace is awe inducing and seeing the Houses of Parliament and Big Ben from above is superlative inducing.  Then just when you think it can’t get any better, somebody puts a glass of champagne in your hands. 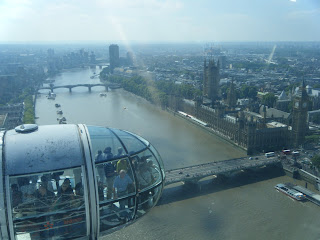 It was at that moment that I decided to start playing the lottery again as I don’t want to experience anything else in life without holding a glass of champagne.  At the Post Office getting your Car Tax – have a glass of Champers Sir.  Standing in the ‘Ten items or less’ aisle in Sainsbury’s – here are your bubbles Sir.  Watching a never-ending School play – Champagne would be lovely please Headmaster.  Oh yes, that will be the life for me.
Our lovely host in the capsule was called Joy and she did an excellent job.  She was always on hand to take pictures for you or point out some of the sights.  It was once I stopped looking at all the obvious monuments and buildings that I realised how much of London I hadn’t seen and how much it had to offer.  Standing on top of the world over-seeing our beautiful city, I felt a sense of pride that I hadn’t felt since my daughter accidentally-on-purpose tripped up the school bully and got away with it.  All too soon our ride was over, but then we hopped straight on the boat for the cruise down the Thames.
So we proceeded to view London from a lower, but no less interesting, perspective.  As soon as the Tour Guide got on the microphone I knew we were in for a treat.  He sounded like Hugh Grant at his funniest (think About a Boy rather than Nine Months) and his spiel was part factual, part comedy routine.  For example –
“Big Ben is actually named after Sir Benjamin Hall who oversaw the installation.  Thank goodness his name wasn’t Richard.  Or William.”
And
“The Bloody Tower achieved its nickname due to the bloody murders that occurred there, including the rather bloody murder of the two young princes.  You can’t see the Bloody Tower that well because of all the bloody trees.”
He managed to keep this patter going for the entire 45 minutes of the cruise and it certainly added to the experience.  The trip took us past Westminster Palace to Lambeth Bridge, there it turned around and took us down to Tower Bridge, then another U-turn that brought us back to the London Eye.  It was a most relaxing way to view the Thames and loads preferable to the way I normally see it – running down the South Bank after the kids.
It was a great day out and it re-ignited my love affair with London.  I’m not saying where you live is bad and I’m not saying your town or city is in some way inferior.  All I’m saying is that London Rocks and there are a thousand good reasons why it’s still the hub of the country.  I’m a Londoner through and through and proud of it, I’m just sorry I forgot it for a while.
Many thanks to Alison from Hill & Knowlton for the tickets, they were very much appreciated.
Posted by Unknown at 8:52 AM 6 comments: