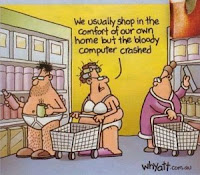 The notice on the door read “The children will be taking part in a sporting event so can you please ensure they are wearing sports clothing on Thursday…”  An innocent enough request, in fact it was quite polite of them to actually tell us rather than rely on the memory of a five year old, especially a five year old that can switch subjects faster than I can change TV channels.