Recently those good people at OXO contacted me to ask if I wanted any help making Mothers Day a fun and special day by sending me one of their ‘Mother’s Day Magic’ Meal kits.  I was looking for a bit of inspiration anyway, the kids had been nagging me about wanting to cook a meal for her anyway, so I accepted.

Later that week the package turned up, games and stuff to keep the kids occupied, some memorabilia  to keep all my knick-knacks and recipes tidy, a food voucher, and more OXO cubes than you can poke a stirring spoon at.  Oh, and some scoring cards, apparently our cooking was to be judged, no pressure then. 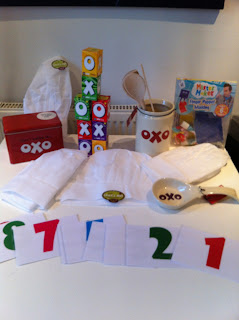 So the day of Mothers Day Eve (as my lot refer to that Saturday) arrived and with a vague plan of action and a list of ingredients written on the back of takeaway menu, off we went to the shops.  Ingredients were chosen, flowers were picked and booze was stockpiled.  We were ready.

The morning came around, gifts were given, homemade cards were cooed and ahhed over and full English was cooked and consumed as I explained to the Mrs the plan of action.  After I had done my own dutiful son duties and after we had been to the restaurant for the already booked (although not by me to my shame) Mothers Day lunch, we would drop her to her own Mum so she could have a few drinks with her and we could make our meal par excellence.

For starters we had plumped for homemade tomato and basil soup which was always going to be a messy affair with a six and eight year old helping out.  Much to Kaedes disgust I wouldn’t let them do any of the chopping but I did make them chief throwers-in and stirrers.  After sautéing the onions, carrots, garlic and celery we added our toms, salt and pepper, basil, two of our OXO vegetable stock cubes and 1.5 litres of boiling water.  We then let that bubble away to be dealt with later on.

For the main course we were having venison in red wine pie with roast potatoes and tender stem broccoli.  A bit of a gamble on my part as I had no idea how the kids would react to eating Bambi, but fortune favours the brave and all that.  After chopping up all the ingredients, including two beef OXO cubes and the best part of a bottle of wine, the kids took it in turns to throw everything into the HomeCooker (thank you Jamie Oliver) and all seemed to be going swimmingly until disaster struck. 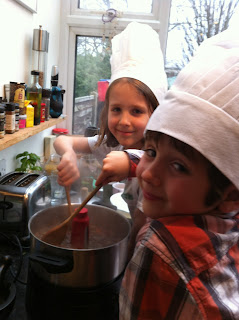 In her haste to put the carrots in before her brother, Kaede had knocked over a bottle of olive oil and before you know it we had our very own Deepwater Horizon situation.  Five tea-towels and a large glass of wine later and the oil spill had been dealt with.  Whilst the pie mixture was bubbling away the Mrs returned and luckily for us, was none the worse for wear.  I decided it was about time she spent some quality time with her offspring and gave them the finger puppets to make, leaving me in relative peace to sort out the rest of the dinner. 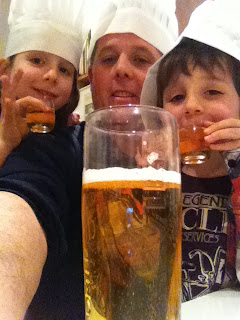 I part boiled the roast potatoes and before I put them in the roasting tin I gave them a liberal sprinkling of some crushed up chicken OXO cubes, just to give them an extra special tang.  I then blitzed the soup and much to the kids disappointment, I remembered to keep the lid on every time, they were hoping for a tomato volcano eruption.

The kids seated the guest of honour attended to her every needs (topped her glass up) and starters were served.  The soup was a hit and we were rewarded with a score of 9 but you’ll have to take my word for that as I was so busy rushing around I forgot to take any pics of our triumphant scores.

Next up was the mains and I started to do the pie, pots, veg juggle – all whilst slurping away at a moderately large glass of wine, multitasking at its best.  I personally thought the pie looked the business, initials added at behest of Nate, but the truth would be in the tasting. 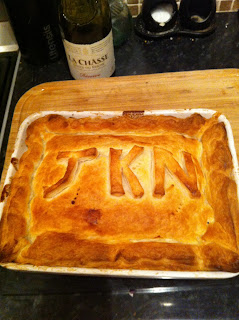 Another huge success (even if I may say so myself), the kids devoured theirs like food was being outlawed tomorrow, but I fear that next time they watch Bambi they will be on the side of the hunter.  The potatoes were some of the best I had ever served and I will definitely be repeated the stock cube trick in the future.  We scored another 9, with an addendum that it would have been a 10 but there was no ‘0’ supplied with the scoring cards, ironically something I was grateful for when I first opened the pack.

Empty plates were returned to the kitchen and whilst the kids entertained Mum with some magic tricks, me and my trusty Gaggia started making dessert…home-made Minstrel ice cream.  Obviously I didn’t home make the Minstrels, I just battered the hell out of them and added them to the ice cream mid-way.  I was tempted to somehow add a stock cube but I feel it’s a cardinal sin to muck with ice cream too much - I love Heston but if he serves me up beef ice cream I’m not going to be happy.

Although it was never in doubt, I can report that the ice cream was a hit and received the more than obligatory score of 9.

I decided to leave the clearing away and washing up for the next day as quite frankly, I was feeling so full and had put on so much weight during the day that my face had gone from looking sarcastic to jolly.  The triumphant chefs stood up and received a one woman round of applause and we finished the night off with a game of Frustration.

Many thanks to OXO for all the free goodies and Charlotte at Ketchum for putting it all together for me.
Posted by Unknown at 10:41 AM

Firstly I never knew wine could clear up oil. Secondly I am going to try the roasties trick too. -HMx