An oft used phrase is 'Great minds think alike'. I would like to add a slight addendum to that, 'Sadistic minds think alike'. The lovely, colourful, and slightly twisted bloggers that are Insomniac Mummy, La Beet, and The Dotterel have all tagged me with the 'Favourite Photo Meme'. I would like to think that they asked me because they love the self depreciating and modest humour of my blog, but I rather suspect they had the 'Shit, I need to think of some names to pass this on to' blind panic. I am thinking of renaming my blog site 'Zoo's line is it anyway', so in future dodging the meme lists by being at the end of their reading lists. All jokes aside, would leave me with nothing to say, so I will continue in this vein.

My first photo is one from one of my most recent surreal days. I was going to say most surreal day, but that prize would go to the day I missed a plane coming home from my Brother-in-law's house in Germany. There was a huge traffic jam on the way to the airport and we started to do the 'missing the plane' panic. Stephen had a theory that all the roads ending in an even number ran horizontal, all the odd ones ran vertical. Using this theory, and without a map, he attempted to leap frog the jam. It's hard to judge if this theory was correct, or if it even worked, but we did miss the plane so I'm going to answer in the negative.

The Airport was one of those dodgy ones that was nowhere near the actual city it pretended to be. In fact, it was just an aircraft hanger on an old deserted Army base. It had a portacabin toilet, and when you (eventually) handed your luggage over, it was between a hole in a corrugated plastic wall, with a pair of hands the other side. In one corner of this massive hanger there was a vending machine, but that was it for facilities. The next plane was not for another 10 hours, so we decided to get a cab into the nearest town and waste the day there.

It is at this point in the story that I should probably introduce my fellow travellers that day. There was my good self, a staunch atheist, almost rabid in my hatred of all things holy once there is a drink inside me. My Wife the good catholic, her brother the lip-service catholic, his wife the God knows what, and finally the person the Pope rings up when he has a theology question, the Mother-in-law.

The first thing we saw when arriving, was a huge cathedral/church. The second thing we saw were Nuns, loads of them, hundreds. I felt like a Lion wandering the Serengeti in amongst a herd of unsuspecting Zebra. There was row after row of shops all selling holy candles, candles so big you could use them as pillars. Holy pictures of Jesus in every pose known to catholic-kind, except that really funky double thumbs up one. Then there was a sea of brown cassocked monks, steadfastly avoiding eye contact with all the nuns, lest an explosion of pent up lust occurred.

I had to spend the day in this place and I had no idea how I was going to cope, then I saw a bar and my prayers were answered. I started to drink like my life depended on it, and the others joined me, the place was just too damned creepy. I'm not sure I could ever do justice to how funny that day became, I seem to remember just laughing all day, but can't think of many reasons why. We hid from my BIL every time he went to the toilet, I attempted to get my photo taken with as many Nuns as possible, and I rinsed beer out of my hair in one of the church's fountains, all juvenile stuff I know. Anything to pass the time, we even made a song up called 'Welcome to the nightmare Niederrhein' to the tune of Hotel California.

Anyway, I can only find one photo from that day, and I'm smoking in it, and as I gave up three years ago and still miss it, the picture makes me sad so can't count.

The most recent surreal day was the day we had a power cut that lasted all day and into the night. Just me and the two little ones, the whole story is at 'Your Worst Nightmare' on this here blog. So here is a photo from that day. 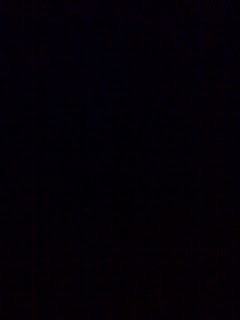 This is my favourite photo though, has no real interesting story to it, hence the above babble you had to wade through just to get here. I used to own a pub in East London and every summer I booked a big 16 piece Swing band called Harry Martin and the London Swingfonia. Martin is a mate of ours and would oft hang around afterwards for a few beers. He had left his microphone set up and my then one year old daughter decided to give us her best Liam Gallagher impersonation and started singing. 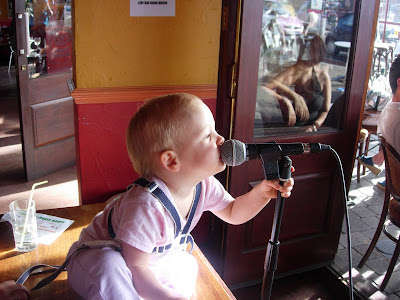 OK now to my victims, in alphabetical order of course:

Are we nearly there yet Mummy?
Brits in Bosnia
I'll think of a title later
Musings of a Geriatric Mummy
W.M. Morrell's musings from Down Under

Laura - Are We Nearly There Yet Mummy? said...

Thanks for the tag but I've already done it Muhahahaha

Yup, I'm the idiot clicking on the first photo wondering why I couldn't see anything (until I started to read the post itself!). Had to laugh at the description of your Mother in Law - I have some relatives of a similar Cardinal status back in Newcastle.

Thanks so much for the curse, err, I mean tag hon,such an honour.
Searching through the archives now....
BTW love the first pic, that's the best I've seen you look, could've shaved though.

I knew you'd make me laugh you nutcase, that's why I tagged you!

And laugh I did!

I apologise for my belated comment. Have been having a fist fight with dial-up. Dial-up won.

Hey, I wanted your fave photo and you've given me two pics, neither of which qualifies. Under the rules of 'meme' you have to post the pic of you with all the nuns or God will be cross. You have been warned!

I have a photo of lots of nuns on a zebra crossing in Rome. If you'd like to borrow it, to keep The Dotterel happy?